*These are Health Care Financing Administration projections.9
**"Other" includes drugs, dental and other professional services, and so forth.

Health insurance proposals are frequently shipwrecked on the shoals of their financing; any serious proposal must specify a revenue package. Although the NHP would not result in a net increase in total health care expenditures, it would produce a major shift in payment sources toward government and away from private insurance and out-of-pocket payments. We emphasize that the average individual and business would not pay more for health care under the NHP but would pay taxes that take the place of, but do not exceed, current premium payments and out-of- pocket costs. Moreover, with the single payer's capacity to control inflation, individuals and businesses should soon enjoy reductions in the rate of increase of their health care costs.

What principle should underlie the choice of revenue sources? Health care is only one factor - sometimes a minor one - in the promotion and preservation of health. Poverty, racial oppression, substance abuse, lack of education, lack of exercise, overnutrition and undernutrition, and occupational and environmental hazards all damage health. Some of these factors can be influenced by society's revenue-generating mechanisms. For example, raising excise taxes on cigarettes and alcohol reduces their consumption and thereby improves health, particularly among teenagers and the poor.25 On the other hand, burdening low-income families with high payments (whether taxes, premiums, or out-of-pocket dollars) reduces their disposable income and amplifies the ill effects of poverty. In contrast, a system of taxes and other payments that reduces the burden on low-income families without impeding job formation may ameliorate poverty's health consequences. Thus, funding mechanisms can be "healthy" or "unhealthy."

*These figures are based on the public share of spending for these services in Canada. The shares are less than 100% because certain services, such as cosmetic surgery, life insurance examinations, and private room surcharges, are not covered benefits.24 **These figures are based on our "best guess" estimate, since the NHP will provide more extensive coverage of nonhospital and nonphysician services than do the Canadian provincial plans. Nonprescription drugs are an example of a product in the "other" category that will not be covered.
***A total of $93 billion of personal health care expenditures uncovered by the NHP remain as out-of-pocket and individual private insurance premium costs.

We estimate that public expenditures will account for 85% of health spending under the NHP, requiring $509 billion in revenues for 1991 (Table 3). We will discuss these revenues in three categories: (1) payroll taxes, (2) general government revenues, and (3) payments by individuals (Figure). 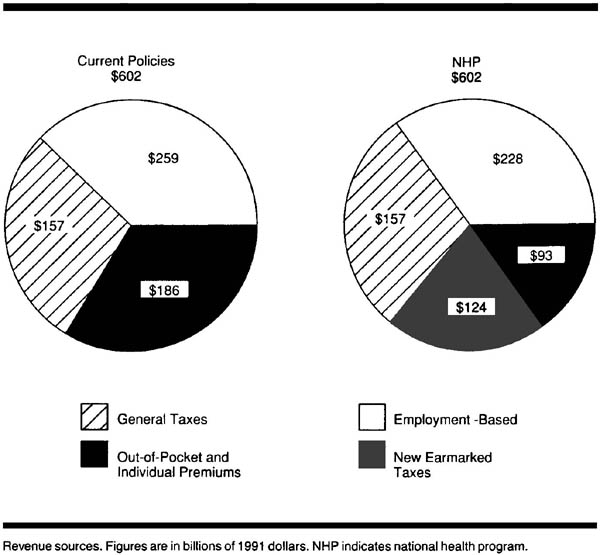 The regressive nature of a payroll tax makes it a less-than-healthy revenue source; the employer share is often shifted to employees as lower wages or to consumers as higher prices.30 It should be made more progressive by reducing the employee share for lower-wage employees, by raising the employee share for high-income employees (eg, eliminating the current Social Security cap), and by reducing the employer share for small business. Employers and employees currently pay almost 2% of total payroll for Medicare-related Social Security taxes and approximately 10% for private health insurance - a combined health-related payroll tax of 13%.29, 31, 32 Using Department of Commerce figures, we project that under the NHP, an average tax rate of 9% for medium and large employers, with an average 2% rate for employees, and half these rates for businesses with fewer than 20 employees, would raise $228 billion in revenues.33 These precise tax rates are only initial suggestions and must be negotiated with the affected parties.

Twenty-six percent of personal health expenditures (excluding nursing-home care) comes from non-Social Security governmental revenues at the federal, state, and locallevels.27, 29 Of this total, 51% comes from individual income taxes, 12% from property taxes, 12% from sales taxes, 12% from corporation income taxes, 5% from gasoline, tobacco, and alcohol taxes, and 8% from other sources.34 Although some of these revenue sources are unhealthy, we propose leaving them intact, adhering to the principle that implementing the NHP should not demand radical economic restructuring. These revenues would generate $157 billion for the NHP in 1991.9, 29

The third major source of health financing consists of payments by individuals; these payments currently account for 31% of health expenditures (5% in individual insurance premiums, 24% in out-of-pocket payments, 1% in Medicare premiums, and 1% in other private funds).27, 29 They are the least healthy revenues because they burden lower-income families far more than they do the affluent. To the extent that they pay for services covered under the NHP, they will disappear.

We propose replacing the majority of individual payments with "healthier" revenues-taxes that reduce income disparities and discourage the use of harmful and polluting substances. The following measures, according to a Congressional Budget Office study,35 would generate $124 billion per year and could be considered as NHP tax revenue sources: (1) a new federal income tax bracket of 38% for families with income higher than $170, 000, (2) a cap on mortgage interest deductions for luxury homes, (3) a 0.5% tax on transfer of securities, (4) an increase in energy taxes to encourage energy conservation and reduce pollution, (5) an increase in excise taxes on cigarettes to 32 cents per pack and on alcohol to 25 cents per ounce, (6) an excise tax on sources of air and water pollutants, and (7) a tax on fossil fuels to reduce carbon dioxide emissions. Although some of these taxes are regressive, their overall effects are health promoting.